Long before he was a contender for the EEMA presidency, Rajeev Jain was one of the event industry’s most famous and colorful figures. Rajeev, who found success in his premier event management agency, Rashi Entertainment, shares his story today about what led him to the presidential race happening right now.

So scroll away, here are words from the man himself! 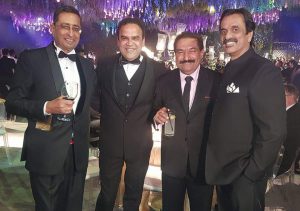 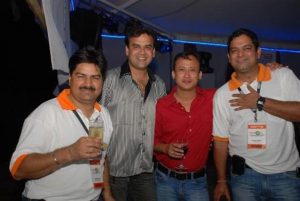 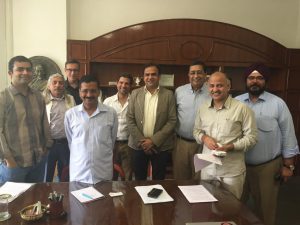 “Necessity is the mother of invention.”

That’s the proverb, isn’t it? Of necessity was born EEMA.

Necessity that came packaged in the form of a 600-page lawsuit filed against small companies that certainly did not have the bandwidth to fight a giant.

The gigantic “Goliath” was T series. The “Davids” were Rashi and Touchwood– two very small companies at that time who were in imminent danger of being crushed by this lawsuit. It was impossible for them to have taken this on alone. The catapult that was forged to fight this was EEMA. 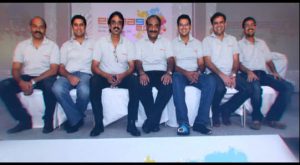 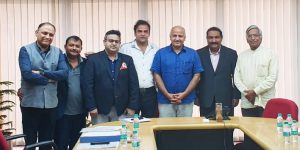 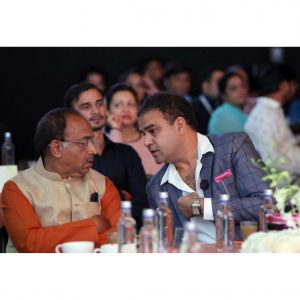 However, soon after, the circumstances tested us again – nobody showed up for our first meeting, or the second – but then, the momentum gathered. In twos, in fours, in sixes, the numbers started building up. Later on, several of us got together, Harjinder Singh Jindi, Nitin Arora, KJ Singh, Serrao, Sanjeev Pasricha, Rajesh Varma, Siddarth Ganeriwalla, Karan Chhetri, and others. And the man who brought his eminence, his patronage, his industry heft and relationships to the fight was our first President- the respected, much loved, late Mr. Michael Menezes. We went to him, he tested us and reposed his faith in us. 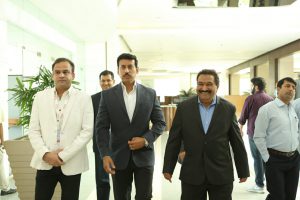 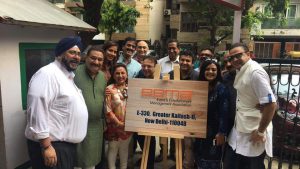 An association formed, and an organization started.We named our association EEMA – after all, this is the business that we were in – events and entertainment. We learned as we moved along. And I believe that we are still learning…. We have so many miles to go. 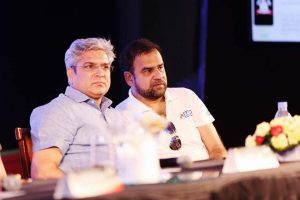 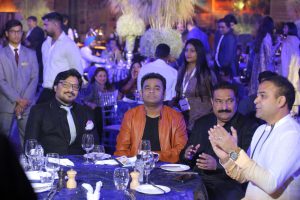 In true entrepreneurial style, the more we grew, the more we knew. We learnt from each other, from other companies and other associations. Our famous ‘constitution’ – which we really need to look at again now – was ‘borrowed’ from the Advertising Agencies Association constitution. Each one of us contributed unstintingly of our time and talent. Soon an office was required and much to the consternation of my elder brother, I signed the papers to declare the only property I owned at that time, (B9, GK II, New Delhi), as the registered office of EEMA. We all had the confidence because we knew we were backed by industry stalwarts like Michael Menezes, Sabbas Joseph, Brian Tellis and other industry leaders. With them in the driver’s seat, this was headed to the right destination. 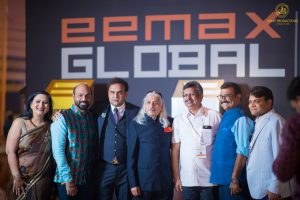 And what a destination! EEMA’s first convention was in Goa in 2008! So many industry heavyweights, a huge hall, 360-degree projections, great sessions and the official announcement of the formation of EEMA – we had ARRIVED. 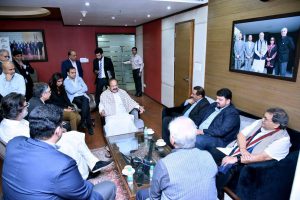 A love affair that never ends…

That’s been EEMA for all of us. All who have been associated with it over the years have been madly, passionately in love with it. We have contributed, without counting the cost. We have gained what cannot be counted. Friends, companions, business partners – an immeasurable fortune – countless memories. EEMA has given us all this and much more. 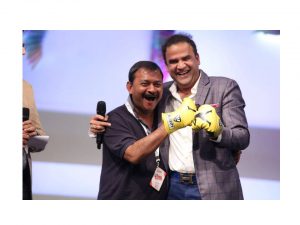 I remember being the first VP under the first President late Michael Sir and then of course the Treasurer of the Association for the longest time. What times those were – we had the best events, thought leadership sessions, government engagement initiatives, cross industry meetings with hospitality, convention venues, hotel and vendor partners, police and permission tie-ups – and of course, the best celebrations. 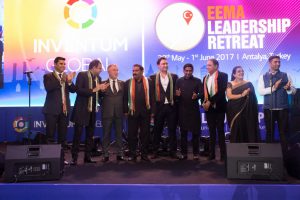 A few years after this, another obsession settled upon us. Our association needed money of its own and as the Treasurer, this fell upon me. Under the guidance of the then President, Mr. Brian Tellis, EEMA’s first FD cheque of INR 50 Lacs was presented at the Kerala Convention in 2014 – and that tradition of being a financially-strong Association has happily continued. EEMA’s strength is the strength of our members! 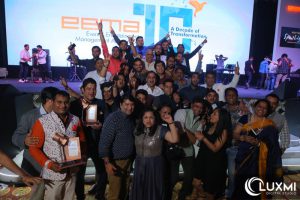 For me personally, this love affair has been constant as have my learnings – having had the privilege of working closely with all four past Presidents – Michael Menezes, Brian Tellis, Sabbas Joseph and Sanjoy Roy – each blessed with his own unique individual style, my learnings have multiplied and I am immeasurably richer for it. 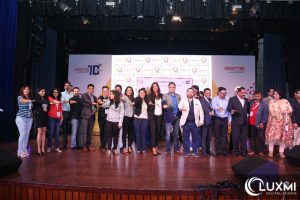 During these times, I learnt also from the support of the NEC and our member colleagues during the organization and management of the 10 EEMAGINEs, EEMAX Awards, launch of WeCare, Safety First, Conventions and Knowledge-Sharing Sessions that EEMA’s leadership team delivered in cities like Agra, Goa, Delhi, Kochi, Mumbai and Jaipur. 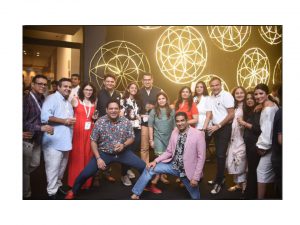 Not only in India, my memories extend to EEMA’s Global Leadership Retreat in Turkey as well. The year 2017, with 82 members enjoying with their families in Antalya and all 3 Presidents on the dance floor with their wives – that year and those memories will forever be etched in my mind.

Working on “Hum Hain Umeed –E– Kashmir”, I learned to dream big and believe in the power of your dreams. This initiative brought a galaxy together to raise funds and awareness about the plight of the victims of the Kashmir earthquake. Standing together with us were Amitabh Bachchan, Aamir Khan, Sushant Singh Rajput, Parineeti Chopra, AyushmannKhurrana, Sanjay Dutt, Anushka Sharma, Ranbir Kapoor and multiple artists with our show telecast on 36 Zee TV channels. This was also the arrival of EEMA on the big stage. 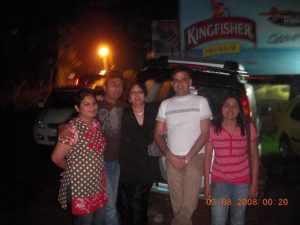 Learning from leaders of EEMA I have been able to extend my network into the political arena and have had the privilege of working with leaders in the BJP, Congress and AAP and with personalities like Arvind Kejriwal, Manish Sisodia, Babul Supriyo, Rajyavardhan Rathore, Vijay Goel, Poonam Mahajan and many more. It is also completely my privilege that this platform has given me the chance to voice my perspective at industry forums like CII, FICCI, ASSOCHAM and of course across numerous satellite channels and print media. 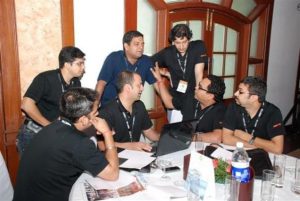 As an association we need to work with organisations like CII, FICCI, etc. but we need to build our own network and our members have the best network. We use it for our individual businesses on a regular basis. Imagine the power that can be unleashed when we bring our network of relationships together working hand in hand across the country.

No, I have never read even one line of Shakespeare – an EEMA friend of mine had once shared this Shakespearean line with me as a beautiful expression of the unchanging nature of true love. EEMA may have changed now, but our love for EEMA cannot change. That’s why I have raised my hand today – after so many years and having served in various roles – for the post of the President. Our times are challenging – our industry is under a threat like never before with this COVID crisis. We need to come together like one powerful unit – not be driven apart by petty politicking and divisive dirt-throwing – we need to confront the reality that faces us and find the strength of togetherness and common counsel. It was a necessity that birthed EEMA and brought all of our small companies together to create an Association. A much bigger danger confronts us today, which threatens not just one or two small companies but the entire industry. The necessity now is for us to be together, be positive and overcome this.

EEMA’S FIGHT HAS ALWAYS BEEN THAT OF DAVID AND GOLIATH. Pitted against major opposition and daunting challenges we’ve always come on top. Maybe what we face today is similar. I’m on the side of EEMA and I know I’m David! Together we will win!!