Former Miss India Universe, Simran Kaur Mundi and legendary Punjabi singer Gurdas Maan’s son, Gurickk Maan kicked off 2020’s wedding season with their elaborate yet intimate wedding ceremony at Neemrana’s Baradari Palace in Patiala. With Valentine’s day right around the corner, your heart will burst with joy for the happy couple- and at these oh-so-pretty pictures! 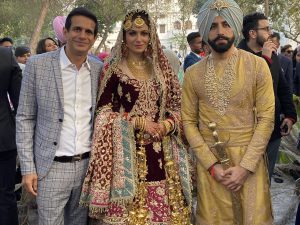 Back in 2008, Simran was crowned Miss India Universe, and more than a decade later, she tied the knot with long-time sweetheart, Gurickk Maan. From the outfits to the décor, the wedding was a day to remember. The picture perfect couple stuck to basics and dressed in yellow and red hues for most of their wedding functions, which they kicked off with a mehndi function. The bride chose an elegant yellow lehenga and paired it with a red dupatta to grace her bridal mehndi. A traditional Punjabi ceremony followed, for which the couple stuck with their cherry-picked hues. While Simran looked gorgeous in a heavy embroidered red lehenga, Gurickk  matched his chic bride with a mustard outfit coordinated with a blue turban. The bride chose traditional gold details and jewelry for the wedding day, and bought her look together with a royal gold embroidered dupatta. Her groom on the other hand chose a statement neckpiece as a finishing detail to his outfit. Their looks were paired perfectly with their flawless floral and pastel décor. The celebrations included a Sufi dinner and a guest-list consisting of Bollywood A-listers including the likes of  Diljit Dosanjh, Poppy Jabbal, Badshah, Guru Randhawa, Vicky Kaushal and Kapil Sharma. Harshdeep Kaur’s soulful and fervent voice added to the sophistication of the evening. Countless friends and fans took to social media to congratulate the newly-weds and celebrate their coming lifetime of togetherness. 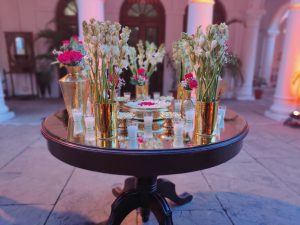 Following the soothing dinner from the previous night, guests were taken in a slightly different direction, when the groom chose to include a little bit of adventure into his wedding gala as well. Guests were driven along the Satluj river in vintage vehicles to relish a countryside lunch. Florals and pastel hues surrounded the couple as they sat down for their haldi and jaggo  rituals. The pre-wedding party, filled with glamour and just the right amount of zing, was a night to remember with performances from the legendary Gurdas Maan, Badshah, Mika Singh, Kapil Sharma, and Guru Randhawa. The couple danced the evening away, while celebrities like Vicky Kaushal, Amy Virk, and Honey Singh joined in the festivities. 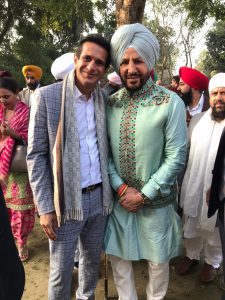 The newly-weds chose to get hitched in a gurudwara, the very gurdwara Gurickk’s parents tied the knot in several years ago. The location they chose, adorned with brass and marigold, added to the charm of their event, and the beautiful décor, reflected their emotional connection to the place.  The sit-down held right after the wedding was an elegant culmination for the preceding days’ celebrations. The newly-weds chose a rustic floral theme, with raw jute and pampas grass adding to the charm.

From a elegant mehndi ceremony to a lavish sangeet and wedding, FB Celebrations ensured that the couple’s wedding dreams come true. Bhavnesh Sawhney, the co-founder of FB celebrations stated, “It was an absolute pleasure to have had the opportunity to curate the wedding experience for the lovely couple. We tried to incorporate all their personality traits within the wedding in elements such as decor, hospitality and even in detailing such as gifts and stationery. It was essential for us to exude the same warmth as that of the family to all the guests owing to level of intimacy.” 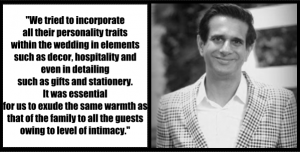 The wedding surely was a feat to remember, with hashtags like #SimRickk trending for days after. Well, here’s to wishing the happy couple a lifetime of love and belonging!